Prince Harry has photobombed New Zealand Commonwealth Games officials in Glasgow – and they were so chuffed one of them made it their profile picture on Facebook. 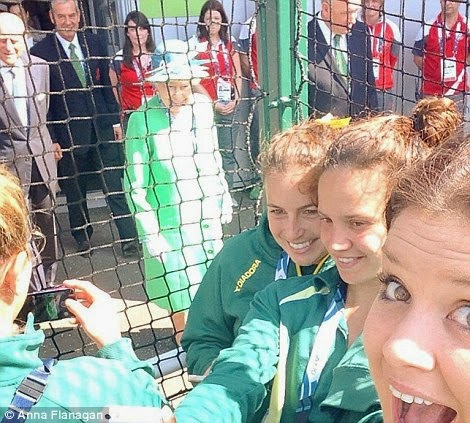 The three men in the their black and white New Zealand team kits leaned in with their arms around each other as the Royal popped up in the background in a white shirt.

A chuffed Trevor Shailer quickly changed the photo to his Facebook profile picture.

He wrote: ‘Photo of the day…. A Royal photo bomb by Prince Harry with Titch (Sir Gordon) and Gary Hermansson at the Swimming venue tonight. Thanks to Bev Hari for taking the pic…fun times supporting our athletes at the Glasgow Commonwealth Games!’

The Duke and Duchess of Cambridge were also at the event with Harry at the Tollcross Swimming Centre in the Scottish city’s east.

They took the picture, which showed the Queen peering into the photo in the background, before their opening match of the Commonwealth Games against Malaysia, at the Glasgow National Hockey Centre.