A child has been abducted from a house located in Katugampola, Nikaweretiya by an unidentified group who had arrived at the house with sharp weapons in their possession. The Police Media Unit said that four masked individuals who had arrived in two motorbikes had carried out the abduction. 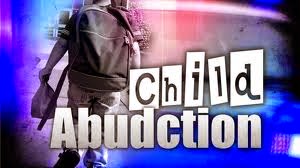 The father and the mother of the child who had attempted to protect the child had sustained injuries in the incident. The police said that investigations have been launched to ascertain the identity of the suspects.