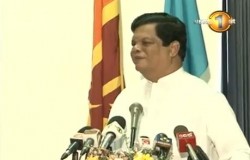 At an event held at the Sri Lanka Foundation Institute on Tuesday, Minister of Education Bandula Gunawardena said that cabinet approval had been granted to include language.

'Last week I was able to obtain cabinet approval to make it compulsory for the mother tongue, history and religion to be taught at international schools and private schools. This decision was made on the stance that the majority of students in international schools, private schools and government schools can move forward and reach higher in education,' stated the Minister.