More and more people are returning to their townships in the Northern Province. People are settled, towns, shops, banks and schools started functioning properly. Hospitals are back into action. And all these create a never ending demand for one of the most important component in proper functioning - electricity.


The development needs to be rapid to the Northern parts of the country as these areas were long torn apart. The target is to provide 100 percent electricity to Jaffna, Vavuniya and Mannar by the end of year 2013. As of today the Northern Electricity Development Project conducted under the Ministry of Power and Energy and the Ceylon Electricity Board is providing electricity power even to the most rural villages of the Northern Province. "The reconstruction of electricity facilities and electrification is considered one among the major priorities to commence resettlement and commercial activities," said M. A.D. N. Gratian the Project Director (Uthuru Wasanthaya) of the Ministry of Power and Energy.

As of today the Ministry of Power and Energy has provided 45,000 power connections to the resettling areas of the Northern Province as free service connections. On a special circular issued by the Ministry of Power and Energy, free energy is given to the people until they build up their economy. Under this project, 12 million units of free energy has been supplied to the resettling communities at a cost of Rs. 900 million. 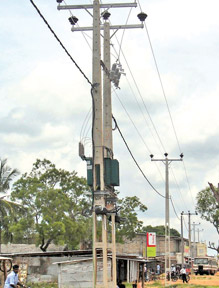 Under the directive of President Mahinda Rajapaksa the Ministry of Power and Energy formulated an electricity development project for "Vadakkin Wasantham" (the Northern Spring) - the mega development project for the emerging North. As per a Cabinet Paper dated June 01, 2009 the project is initiated and is operated under the Ceylon Electricity Board. The target of the project is to achieve 100 percent electrification in the Northern Province by end of 2013, said Gratian.

A 15 km high tension line was rehabilitated to restore the Madu Church and electricity was supplied in December 2008. The first electricity supply to Kilinochchi and Mullaithivu was on July 15, 2009. Construction of a 49 kilometre medium voltage line from Puliyankulam Junction to Murukkandy Temple along the A9 road started in February 2009 and was completed in June the same year. Electricity supply to Malavi Scheme in Mullaithivu District in started in April 2010. National Grid Supply to Mullaithivu District started in July 2010. A 34 kilometre long Medium Voltage line from Paranthan to Puthukudiyirippu and Mullaithivu was constructed in April 2012. In Kilinochchi the Vishvamadu Substation Constructed in April 2012 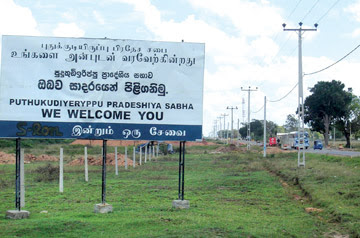 Under the Northern Spring national development drive the Ceylon Electricity Board has completed 13 medium voltage power supply projects with power lines extending to 392 kilometres at a cost of Rs. 940 million. Under this project a 92 kilometre power line is laid from Puliyankulam to Muhumalai along A9 road. Under this, medium voltage power lines are extending from Mankulam to Mullaithivu, Paranthan to Pudukuduyiripu, Wedithalathivu to Mullankavil, Murukandy to Vaeruvil, from Mankulam to Thenniyankulam through Thunukkai and many other areas such as Oddusudan, Nedunkerny, Ramanathapuram, Killinochchi, Elephant pass, and Adampil.