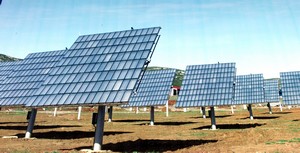 Plans are afoot to promote solar power based electricity, specially in the fields of agricultural and irrigation development in the Mannar district.

Solar electricity will also be utilized for pumping drainage water being disposed from nearly 50,000 acres of paddy fields in the Mannar District to the 160 cascade tank system through a network of anicuts according to Mannar Chief Irrigation Engineer Palitha Wickramatilake.
"We witnessed the way Japan has been utilizing solar power for creating an industrial renaissance and processing it for domestic purposes. We have been preparing a detailed report as to how solar electricity could be adopted in promoting the irrigation and agricultural development in the Mannar district," Wickramatilake emphasized. Wickramatilake said that under the proposed down Malwathuoya reservoir project, the waters of the oya carrying water at a speed of 1,50,000 cubic feet per second specially in November, December and the rainy season, would be trapped to create a reservoir by the construction of 3 1/2 kilometre long dam.
"It is expected to provide drinking water to Vavuniya too from the proposed reservoir project using solar electricity by pumping water. The government will provide funds step by step having prioritized the construction of down Malwathuoya reservoir which will have a capacity of 1,50,000 acre feet" Wickramatilake indicated further.