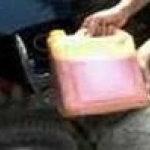 Four persons not entitled for fuel subsidy stamps generated an argument, caused turmoil. The fuel subsidy stamp distribution took place with the assistance from police and military by the District Fisheries Department officials, and the Pesalai fishermen said they are affected due to this arrangement.

Regarding this they notified to "Udayan" press said, an event was organized to distribute fuel subsidy stamps today, yesterday and day before by the Mannar district Fisheries Department. Officials during the ceremony had invited the military and police. Stamps were issued for last month. 250 fishermen engaged in fishing trade in Pesalai Siruthoppu Nadukuda including regions were selected for the benefit of this stamp use, but the distributions were done in a discrimination manner was said.

“This caused anger to us and we confronted with the officials. At this time, one of us was assaulted by the army. In this state, they suspended the stamp distribution and those who had not acquired they requested to report at Mannar office to obtain their stamp requirement. This has caused severe crisis to us” was said by the fishermen. Regarding this incident, Mannar district Fisheries Department officer was contacted and he said, “in view of our safety we process this activity with police assistance.

As usual we went to Pesalai today, yesterday and day before. During this time, four persons who were not eligible to obtain stamp got into an argument. This caused disturbance. However police controlled the situation. 95 percent who were entitled received stamps, but to others, it would be issued according to order”, said the officer.