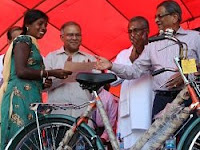 High Commission of India notified that the final distributions of 10000 bicycles covering all the Five Districts of Northern Province have been completed recently. Under the Indian Grant Assistance, 10,000 bicycles distributed to the resettled IDPs in the Northern Province of Sri Lanka on the basis of need based request made by the Hon.


Governor of the Northern Province. Spending about 67 million Sri Lankan rupees, the project had been launched to cater the transportation needs of the people resettled and to assist them in post war recovery. Key attention had been drawn towards the families having school going children, employed in livelihoods requiring mobility, single or women headed families, physically or mentally disabled persons, families living in remote areas, etc. The UNHCR handled the logistics of the distribution. The distributions in five Districts are depicted below.