He said that like the Canadian Prime Minister, the Indian PM too was sending a delegation for CHOGM in his place.

Speaking at a press conference held in Colombo today (November 11), the Minister added that it was regrettable that some dignitaries were unable to attend the meeting but claimed that 37 leaders had now committed to attending CHOGM and that those who cannot attend will not obstruct the progress of the meeting.

He also explained that as controversial Channel Four journalist Callum Macrae was part of UK Prime Minister David Cameron’s 30-man delegation it would not have been justifiable to only restrict him from entering the country.

Rambukwella said that he believes that the journalist can see the country’s situation for himself and correct his wrongs through his experience.

Answering a question on two Australian journalists who arrived in Sri Lanka on tourist visas and were then deported, the Minister said that the rule of law is more important than the country’s image.

However, when questioned on how that belief applies to James Packer arriving in Sri Lanka on a tourist visa to address a business summit, the Minister stated that a tourist visa was no obstacle for discussing business.

Regarding the casino industry, Minister Rambukwella claimed that four persons had purchased casino permits at Rs.100 million each while adding that no one else will be allowed to start casinos in Sri Lanka. 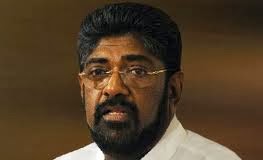