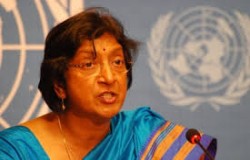 Pillay subsequently met with the Minister of Justice Rauff Hakeem.
Speaking at a media briefing convened followng the meeting, Justice Minister Rauf Hakeem said the UN Human Rights Commissioner had discussed with him a number of factors including the implementation of recommendation of the LLRC Report.
Minister Hakeem said Pillay had discussed the repeal of the Prevention of Terrorism Act, at which point he had made clear the government's stance that the PTA would have to be retained for national security.
Hakeem added at the media briefing that it was a matter of pride for the government, that the UN Human Rights Commissioner is able to travel anywhere in the country, meet anyone and engage with Sri Lanka.