Soldiers across six small army camps in the Jaffna peninsula have been moved to main camps.

Military Spokesperson Brigadier Ruwan Wanigasuriya said that thirty (30) acres of land on which the six camps were located across have been handed over to the residents of the area. 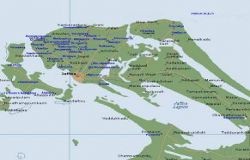 The Military Spokesperson noted that ten (10) houses that were also used by the army have been handed over the public.

As part of reducing the military personnel in the Jaffna peninsula, fifty one (51) acres that were held by the army and forty six (46) houses were handed over.