Girls who take certain skills-based science and technology qualifications outperform boys in the UK, suggest figures from an awarding body.


Data from Pearson, which runs the BTEC awards, suggests that girls who take these qualifications are more likely than boys to get top grades.

Despite this success, girls are vastly outnumbered by boys on these courses.
Pearson's figures show that the number of girls taking BTECs in science, technology, engineering and maths (Stem) subjects is growing - but from a low base.
This year, girls made up 5% of students taking engineering at BTEC Level Two, taken alongside GCSEs. That amounts to 810 girls, a rise from 680 last year.

However more than a third (37%) of these girls gained a distinction, compared with 20% of boys.
At BTEC Level Three, the proportion of female engineers was just 4% - but again they performed better than their male classmates, with 14% achieving the highest grade, as opposed to 9% of the boys.
In information technology (IT), girls made up 38% of the cohort at Level Two but around a third (31%) gained a distinction, compared with 21% of the boys.

The proportion of girls taking the more challenging Level Three in IT was just 18% but again their grades were strong with 15% gaining the top grade, compared with 12% of their male classmates. 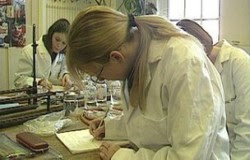