Minister Basil Rajapaksa, who is on a visit to New Delhi, met representatives of the Tamil Nadu Fishermen Federation in New Delhi on 5 July, the Sri Lankan High Commission in New Delhi said.


“The Minister thanked the representatives of the Fishermen Federation for travelling to New Delhi to meet him and emphasised the importance of maintaining and enhancing people-to-people contact between the fishing communities in northern Sri Lanka and in Tamil Nadu in India to resolve problems of fishermen amicably and meaningfully,” the statement said.

“The hour long fruitful discussion focused on all issues of concern to the northern Sri Lankan fishermen including measures that could be taken to address the problem of Indian fishermen crossing the International Maritime Boundary Line (IMBL), and prevent methods of fishing that are harmful to the marine eco system including fish stock. The need to take decisions collectively to address livelihood issues and problems facing the fishing communities on both sides was emphasised.

“The Fishermen Federation representatives conveyed their appreciation to Minister Basil Rajapaksa for sparing his time to meet them and engage in a frank and useful discussion. They expressed their desire to visit Sri Lanka to hold further discussions with the aim of arriving at practical solutions to issues that face the fishermen of both countries. The representatives of the Fishermen Federation conveyed their deep appreciation to President Mahinda Rajapaksa for his constant and consistent sensitivity towards the concerns of fishermen of both countries.” 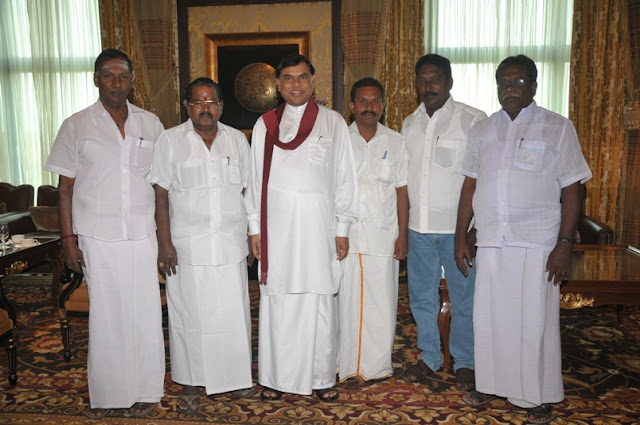