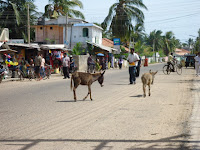 A team of Indian scientists were studying the stray donkeys in Mannar, Mannar Urban Council (MUC) Asst. Chairman James Jesuthas said today. Donkey sanctuary officials from India paid a visit to Mannar to conduct research on the welfare of the donkeys.


The Mannar region had been noted for its presence of donkeys since former times. A media briefing was held on Friday, June 7 to explain the nature of the visit of the Indian officials.

“The donkeys had been around in Mannar for thousands of years, but when the people were displaced due to the war, the close connection between the animals and the people was severed,” Jesuthas said.

“Now, with the people resettling the donkeys have become a problem, as the lifestyle has changed considerably. But outsiders and foreign tourists who come to Mannar are greatly fascinated by the animals.