Death toll rises to 41 as more bodies are washed ashore 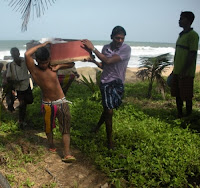 The storm death toll in Sri Lanka has increased to 41 with some fishermen still missing, the Disaster Management Centre (DMC) said Monday.

DMC spokesman Sarath Lal Kumara told Xinhua news agency that the bodies of the 41 fishermen have been recovered with search and rescue operations underway to locate missing victims.

The fishermen had gone out to sea last Friday and got caught under rough sea conditions.

The Sri Lankan air force said Sunday it had deployed its Beech King Air (B-200T Beechcraft) surveillance aircraft to search the coastal areas as part of a joint operation with the navy to locate the missing fishermen.

The navy has sent another ship along with five additional fast attack craft for relief operation.

More than 100 houses were reported to be fully damaged by the storm, according to the DMC.

Sri Lankan President Mahinda Rajapaksa had sought an explanation from Disaster Management Minister Mahinda Amaraweera over the weekend on how the public was informed about the impending storm on Friday night.

The fishermen’s family members have blamed the Department of Meteorology for failing to inform the victims about the storm.