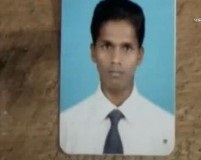 A youth was killed in a clash that broke out between two groups following a cricket match in the Watagoda area in Talawakele Tuesday evening.

An argument over the result of a cricket match that took place in the Madakumbura area in Watagoda led to a clash between two groups.

Police say that an individual died when he was attacked with a wicket.


The victim has been identified as eighteen-year-old Sukumara Paartheevan a resident of the Madakumbura upper division area.

Our correspondent in the area said that another youth, who was injured in the incident was admitted to the Nuwara Eliya Base Hospital.

Police say that the suspects believed to be connected to the incident have fled the area.

Incidentally two houses in the area were also attacked by a  group Tuesday night.

According to our correspondent security in the area was beefed up by Wednesday afternoon.

Meanwhile, a woman was killed with the use of a sharp weapon in the Thiruppane area in Mahakanumulla, Kekirawa.

According to the office of the Police Media Spokesperson the incident is believed to have occurred due to an extra marital affair.

The suspect, who is the husband of the victim, is believed to have carried out the murder after arriving at the victim’s house Tuesday night.

The suspect who was arrested in connection to the incident is to be produced before court Wednesday.