Pope Francis I: Another Humble Man Named Francis Called to Rebuild the Church 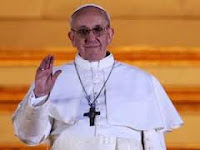 Pope Francis I did something which astounded me. He asked the faithful - before he gave them the Urbi et Orbi Apostolic blessing - to pray for him. He bowed before those assembled in the square during a moment of silence. That was profoundly moving and, I suggest, telling.


VATICAN CITY (Catholic Online) - At 7:07 p.m. in Italy, the white smoke billowed from the Chimney to a world waiting the good news. At 7:18 p.m. the bells made it clear, lest there were any lingering doubts as to whether the smoke was really white. The bells were nearly drowned out by the joyous shouts of the massive crowd who knew God had heard the prayers of His people.

Exuberance filled the air in that historic square. Its timbre reassured millions who heard it over media points of entry around the entire world. The message was for all men and women, "Habemus Papem! We Have a Pope!"

Numerous reports were quickly filed upon the arrival of the smoke. They offered more speculation. For example, the notion that the culmination of five ballots of votes from the Cardinal electors was due to the crisis the Church faces. Others expressed concern as to whether a new Pope could help to heal a troubled church. Whether sincere or not, they really missed the moment.
None of that concern was present in the faces of young and the old gathered in St. Peter's Square. Rather, joy and hope moved them to tears and smiles. They knew the mystery which only living faith can reveal. The promise of the Lord to Peter is reliable.

That promise also applies to his successor, "You are Peter and on this Rock I will build my Church and the gates of Hell will not prevail against it." (Matt. 16:18) In fact, prior to coming forward, the new Pope had just participated in a service with the cardinals who elected him where that very promise from Matthews Gospel was read.

The Proto Deacon, French Cardinal Jean-Louis Tauran Cardinal Deacon stepped out on the central balcony of Saint Peter's Basilica and proclaimed "Habemus Papem". He told a waiting world of the election of the 265th Successor of Saint Peter, an Argentinian Cardinal named Jorge Mario Bergoglio, S.J. The surprise I felt was evident in the faces of the commentators! Their well prepared scripts had to be discarded. Another surprise of the Spirit!

Shortly afterward Pope Francis I, clothed in papal white - without the winter red mozetta which often accompanies the papal vestments- emerged to greet the faithful. He was born on December 17, 1936, in Buenos Aries, Argentina, the son of an Italian immigrant father and an Argentinean mother. He has four brothers and sisters. He is the first Jesuit pope in history and the first to take the name of Francis.

He is known to be a humble man. In fact, among the many things heard in the immediate remarks from those who did know him was that he "rides the bus." That humility was obvious in his demeanor. I quickly discovered that he had taken as his motto for his service as a Bishop, "miserando atque eligendo"  which means, lowly, and yet chosen.

With self deprecating humor he told the crowd that it looked like his brothers the Cardinals "went to the end of the world" to find him. Then, he asked the faithful to join him in prayer for His Holiness Benedict XVI. He led the crowd, and the world which was watching, in the simple recitation of the Our Father, the Hail Mary and the Glory Be.

Then, Pope Francis I did something which astounded me. He asked the faithful - before he gave them the Urbi et Orbi Apostolic blessing - to pray for him. He bowed before those assembled in the square during a moment of silence. That was profoundly moving and, I suggest, telling.

As with all Popes, the choice of the name is significant. Though we await a full explanation as to why he chose Francis I, my heart and mind leapt to an obvious conclusion. He took the name of the little poor man of Assissi, Francis. The one to whom the Lord had appeared and said "Go and Rebuild my Church which you can see is falling down in ruins."

The Lord uses holy and humble men at critical times in Church history to bring authentic renewal.  May the Pope who bears the name of Francis exhibit the humility, deep prayer and level of spiritual gifts which his namesake offered at another critical time in the history of the Church and the world.

In the days ahead we will hear much more about Pope Francis I. The media is already filled with people parsing his theological training and looking for "clues" as to how he will exercise his office. His association with the movement Communion and Liberation, his theological orthodoxy and his love for the poor have all been mentioned. They are encouraging to me.

There will be plenty of time for all of that. We will certainly join in. However, as for this moment, I ask our readers around the globe to pray for our Pope, Francis I. Then, take his first direction which he gave after the Blessing when he grabbed the microphone spontaneously and spoke again to the crowd, "Have a good evening and rest well." The Church of Jesus Christ is in good hands.

Pope Benedict XVI's Prayer Intentions for January 2013
General Intention: The Faith of Christians. That in this Year of Faith Christians may deepen their knowledge of the mystery of Christ and witness joyfully to the gift of faith in him.
Missionary Intention: Middle Eastern Christians. That the Christian communities of the Middle East, often discriminated against, may receive from the Holy Spirit the strength of fidelity and perseverance.