Northern Province Chief Minister elect C.V. Wigneswaran was left stranded for around three hours on Monday night at a Vavuniya fuel station where diesel had been pumped to his vehicle instead of petrol while he was returning to Colombo after a meeting in Jaffna, sources said.

A mechanic had to be called in to rectify the matter after realizing that the wrong fuel was pumped. However, after repairing the petrol tank of the vehicle, the group had resumed their journey to Colombo past midnight 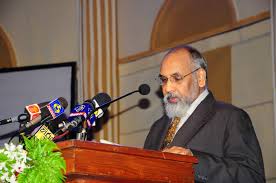