The Department of Elections says, “the total cost for the Northern Provincial and Northern, Central council elections would be Rs. 1520 and this includes Rs 20 million to cover expenses for international election monitors”, said Additional Commissioner of Elections R.M.A.L Ratnayake.

He also added that 11 international election monitors will be invited by the Department of Elections to monitor the polls in September. He said that the Department will take a decision over the next few weeks on the countries from which to invite the international monitors.

The Department of Elections said that 131 nominations had been received from recognized political parties for the three provinces of which 126 were accepted and of the 79 nominations received from independent groups 75 were accepted. A total of 2279 candidates from recognized political parties and 1506 independent groups will be contesting the elections in the three provinces.

The battle at the Northern PC Elections will be between the Tamil National Alliance (TNA) and the ruling UPFA. The wife of former LTTE eastern region political head Elilan has been included in the list of candidates by the TNA and former LTTE member, Daya Master, who was initially expected to contest the elections for the government ticket, had not been included in the final list. 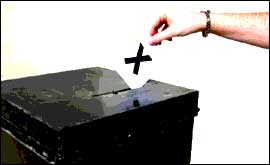