Home » Other News » Rise in violence 'linked to climate change'

A study suggests shifts in climate are strongly linked to increases in violence around the world. US scientists found that even small changes in temperature or rainfall correlated with a rise in assaults, rapes and murders, as well as group conflicts and war.

The team says with the current projected levels of climate change, the world is likely to become a more violent place.

The study examples include an increase in domestic violence in India during recent droughts, and a spike in assaults, rapes and murders during heatwaves in the US. 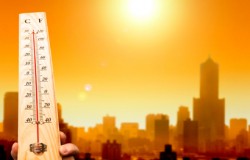