The Election Secretariat says that the number of election complaints they have received has risen to 246.

The highest number of complaints have been logged from the Kurunegala district. 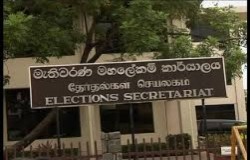