According to a report by the Express News Service, the four fishermen have drifted into Sri Lankan waters by strong winds after engine of their boat developed a mechanical failure and got stranded in the seas near Thalaimannar.

Sri Lankan navy personnel, who routinely patrol the areas have spotted the four stranded fishermen and rescued them. The four fishermen would be handed over to Indian Coast Guard personnel on Saturday, the President to Alliance for the Release of Innocent Fishermen (ARIF) told the Indian media. 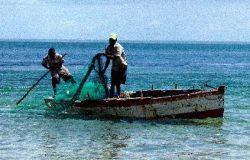