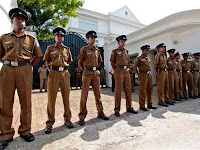 The student who is alleged to have assaulted and injured the head of the Law Faculty of the Open University with a sharp object has been remanded until July 2.

The order was made following an examination carried out by the Nugegoda Magistrate at the Kalubowila Teaching Hospital on Wednesday evening.

The suspect, who consumed a certain kind of tablet, is receiving treatment at the Kalubowila Teaching Hospital under guard.

The police said 15 persons including a security officer at the university have been questioned in connection with the incident.

Reports state that the student in question is a doctor residing in Jaffna.

The Police Media Unit said that the suspect assaulted and caused injuries to the head of the Law Faculty at the Nawala Open University Yashodara Kadirgamathambi on Wednesday afternoon.

Kadirgamathambi, who sustained injuries, was admitted to the accident ward at the National Hospital.

The police said that investigations had revealed that the cause of the incident was the refusal by the faculty head to accept a project report submitted by the suspect after the deadline.