First regional office of Registration of Persons opens in Vavuniya 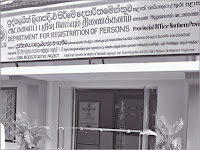 An office of the Department for the Registration of Persons was opened at the Vavuniya kachcheri complex yesterday by Commissioner General of the Department R M Sarath Kumara. The office building costing Rs 10 million was built under a programme funded by the UNDP.

Speaking at the opening ceremony, Sarath Kumara said the new office the first of its kind in the outstations was opened to expedite the issuing of NICs to people in Vavuniya, Mannar, Kilinochchi, Mullaitivu, Jaffna, Anuradhapura and Trincomalee districts. They hoped to issue new NICs to the residents in the North especially ho lost their identity cards due to terrorism.