Units on alert as Mannar - Puttalam Road remains under water

The Disaster Management Centre says that with inclement weather conditions, the Mannar - Puttalam Road that was inundated, still remains under water. 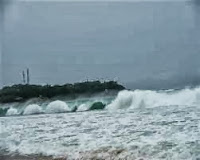 Assistant Director Pradeep Kodippili said that new disaster situations have not been reported so far.

So far ,no damages have been reported, however all disaster management units are on alert.”