Home » Other News » Over 300 affected as Chlorine pipe bursts

Over 300 affected as Chlorine pipe bursts

The number of those affected with respiratory issues after a pipe carrying chlorine to the Avissawella - Penrinwatte water pumping station burst has risen to 302. 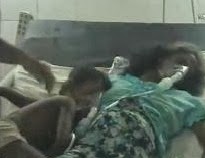 The General Manager of the National Water Supply and Drainage Board stated that those affected by the chlorine had been admitted to hospital.

Sixty five  of these individuals are receiving in house treatment while two of the affected have been admitted to the intensive care unit.

In the meantime the chairman of the water board Karunasena Hettiaarachchi stated that the situation has been brought under control. He further added,

“This happened when the chlorine tank was being changed. The area surrounding the station was affected. We are taking steps in this regard and have brought the situation under control.”