Three people were killed and two injured in a head-on collision between a car and a private bus last morning at Dalada Gama on the Padeniya-Anuradhapura Road.

Police said the victims were residents of Miriswatte in Gampaha and on a pilgrimage to Anuradhapura.

The bus was on its way to Kurunegala. The driver and an elderly lady were trapped inside the car.

The injured were admitted to the Maho Hospital and later transferred to the Kurunegala Teaching Hospital for further treatment. 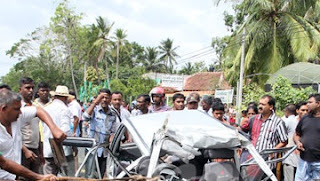