Parliamentary proceedings were temporarily suspended by the chair Thursday due to a debate pertaining to the adjournment motion.

This situation arose when the ruling party informed the chair that the adjournment motion presented by Tamil National Alliance Parliamentary Group Leader, R.Sampanthan affects several cases that are being heard in court at present.

''The government, through its armed forces and the grounds of security, has continued to hold in its possession substantial extents of lands owned and/or possessed by Tamil civilians — the very lands from which Tamil civilians were evicted. And to these lands, evicted civilians have not been permitted to return for the purpose of residence or livelihood.

Those security considerations do not apply any longer."
"I will refer to two locations; Walikamam in the Jaffna district and Sampur in the Trincomalee district. Sir, these lands were declared high security zones when the LTTE was in the possession of long range artillery; and when installations of government were vulnerable to attacks with the use of such artillery, for that reason a large extent of land was declared a high security zone. Now the LTTE is not there. The artillery is not there. The danger is no longer there. So there can be no justification for the continuance of these high security zones," explained TNA Parliamentarian 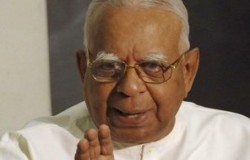