he newly renovated church of Our Lady of Assumption in Mullikulam was declared open yesterday (27thAugust) by Secretary Defence and Urban Development Mr. Gotabaya Rajapaksa in the presence of RT. Rev Dr. Rayappu Joseph, the Bishop of Mannar. T

he renovation work on the church was carried out by the by Sri Lanka Navy as Social Responsibility Project under the direction of Secretary Defence. A 'Mission House' for the parish priest, constructed by the Navy was also declared open yesterday. The Church has a history of over 175 years and was left abandoned due to LTTE activities during their reign of terror. The decision to renovate the church and resume religious activities was taken by Secretary Defence during one of his visits to the area to look into the post war development and resettlement of the displaced Tamil community. 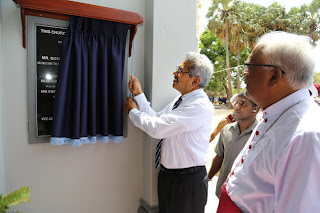