Home » Other News » Over Rs. 10 million spent to renovate Thellippalai Base Hospital

Over Rs. 10 million spent to renovate Thellippalai Base Hospital

The Government has undertaken large scale livelihood, infrastructure, education and health sector projects in the North under the Uthuru Wasanthaya Northern development drive. The Government has allocated Rs. 7,076 million on these projects. The Northern peninsula is regaining its glory.

Once the ongoing projects are completed, the Jaffna district will turn into a State-of-the-art district, Government Agent of Jaffna District to Suntharam Arumainayagam said.The district is achieving rapid a development in line with other districts like Colombo and Kandy, he said.Arumainayagam was addressing a workshop organised for provincial journalists by the Government Information Department at the Jaffna Public Library. He said that the Government has allocated adequate funds to develop hospitals and improve facilities. The Jaffna Teaching Hospital and Thellippalai Base Hospital take prominence among them. To develop hospitals and improve facilities have been felt important with the returning of displaced persons. The Government has given enough medicine and equipment to hospitals in the Jaffna district.

He said the outcome of development depends to what extent the benefits will go to the people.A fully equipped cancer treatment unit functions in the Thellippalai Base Hospital. Acute cancer patients receive in house treatment while a large number of patients are treated in the OPD daily.The Thellippalai Base Hospital was renovated at a cost of Rs. 10.34 million according to the statistics received from the Government information Department.

Dr. Pasubathi Raja said that the Government provided a three storeyed building for the Jaffna hospital at a cost of 2,100 million funded by the Japan International Cooperation Agency (JICA). The Radiology Department functions on the ground floor, operation theatres in the second floor and ICU and laboratories in the third floor. There are 22 beds in the ICU. The Government has given eight ambulances.

Eight fully equipped operating theatre functioned.Plans are afoot to construct construct an accident emergency treatment unit. Cardiotherapict and Neuro surgical unit, Dr. Pasubathi Raja said. A cancer unit also functions. There are two separate wards for male and female patients. There are 60 beds in male and female wards. Statistics have rescaled surge in the number of cancer patients, she said.Treatment for non-communicable diseases, heart disease, kidney disease, diabetic and skin disease, are also available.A number of kidney patients have been identified in the Jaffna district but compared to the North Central Province the number of kidney patients is low in the Jaffna district, Dr. Pasubathi Raja said.

The NECORD project and the Emergency Northern Recovery program extended its cooperation and financial assistance to renovate the hospital. The project was implemented under the "Uthuru Wasanthaya" Northern development drive. The project was funded by the Asian Development Bank (ADB). All structures including buildings were reconstructed while renovating some structures. Some institutions also helped to improve the facilities, Dr. Shankar said.

A blood bank functions in the hospital. There is an eye clinic and an operation theatre are available now. The hospital is gradually developing, Dr. Shankar said.Human resource is one of the main problem. There is a shortage of nurses and which should be addressed immediately. Twenty two nurses have to carry out the work of 50 nurses. Eight nursing sisters serve in the hospital. Shortage of minor staff is another problem. There are 11 doctors and three specialists. There is a need for 30 to 35 doctors for the Thellippalai Base Hospital Director Dr. Shankar said.The construction of a cancer ward is in progress. Nearly 60 percent of work is over now. The ward will be opened by November. Funds for the ward was raised by a walk from Devundra to Pedro Point. This is a trial project. Colours of Courage and the Rotary Club are the main stakeholders of the program. Rs. 200 million was raised for this project. The funds were handed over to the Health Ministry to commence work.The next project will be implemented by the Government.A mental health care unit is also maintained forty males and 30 female patients can be treat. Substance abuse patients also receive treatment in the mental health care unit, Dr. Shankar said. 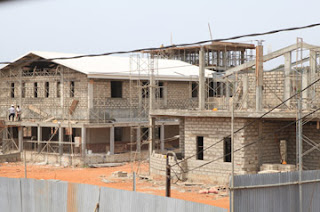