Travellers from across the globe have ranked India’s Taj Mahal among the top three landmarks in the world, a leading travel website has announced. According to TripAdvisor’s 2013 Travellers Choice Attractions Awards, Taj Mahal was ranked third in the list of Top 25 landmarks.


The top two places were taken by Machu Picchu in Peru and Angkor Wat in Cambodia respectively. “The winners of Travellers’ Choice Attractions awards were determined based on the quality and quantity of traveller reviews of attractions,” said a company statement.

Taj Mahal, listed among the new seven wonders of the world, is renowned the world over for its architecture and aesthetic beauty. Built by Mughal Emperor Shah Jahan in memory of his late wife Mumtaz Mahal, the white marble mausoleum in the northern Indian city of Agra is also a symbol of enduring love. In 1983, it became a UNESCO World Heritage Site.

The Taj Mahal attracts 2-4 million visitors annually, with more than 200,000 from overseas. It shares the latest honour alongside Petra World Heritage Site in Jordan and Bayon Temple in Cambodia, which are ranked fourth and fifth respectively in the list of 25 top landmarks in the world. 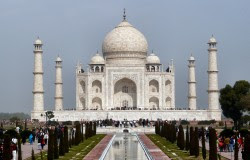