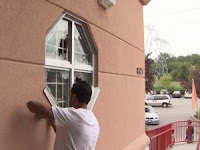 More than 5 lakhs Hindus are residing in Canada. Group of unidentified personals have damage the windows of Lakshmi Narayanar kovil located at the British Columbia on June 23.


CCTV cameras fixed at the site as reordered the attack. Suspects have attack windows with baseball bats. Hindus believes such attacks would create ethnic and religious differences between people.

However police announced this attack reported over personal dispute. The Minister of Immigration Jeson Kenny strongly condemns this attack.