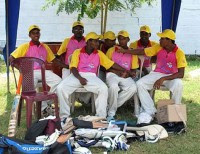 Three young cricketers from Sri Lanka's war-affected regions have been named in the squads scheduled to participate in a one-day tri-series, which aims to prepare Sri Lanka's national side for the Champions Trophy.


Fast bowler S Silojen and wicketkeeper Rishan Tudor, both 19, have been named in the Sri Lanka and Sri Lanka Combined sides respectively, while top order batsman S Sanjeewan, 21, has been picked for Sri Lanka A. Tudor, who played for St. Patrick's College, Jaffna, had impressed Muttiah Muralitharan and Kumar Sangakkara last year, after he was chosen for the Unity Team that traveled to Singapore in October last year.

Sanjeewan, who played for St. Michael's College in Batticaloa, had also been part of that side. "They are really talented cricketers and I'm very happy that they've got this chance," Northern region coach Ravindra Pushpakumara, who had worked with all three players, said. "Last year when we went to Singapore, Murali got to bowl a few overs at Rishan Tudor, who was wicketkeeping, and Murali and Sanga were amazed at his ability to pick the doosra so quickly.

Sanjeewan also hit a couple of very fast fifties on that tour."espn reported Silojen meanwhile, had been spotted by chief selector Sanath Jayasuriya on a recent trip to Jaffna, and has since been enrolled in Sri Lanka's pace bowling academy. He had played for Kokuvil Hindu College. "Everyone who has worked for this is extremely happy," Pushpakumara said. "It's been a dream to see cricketers from the north and east playing in high level teams, and our first objective has been realised." The tri-series begins on May 12, and all seven matches will be played in Pallekele.

The Sri Lanka team for the tournament features only six cricketers who have been picked for the Champions Trophy squad, as the remaining players are currently in India for the IPL.